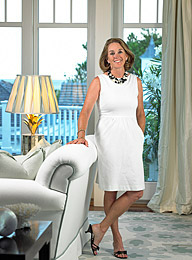 Kim Coleman began her career in interior design in 1981 as a founding partner of Design House Interiors, a firm primarily involved in many local renovations of residential homes and offices. In 1992. Kim joined Sotheby's Auction House's private client services where she was involved in all aspects of the auction business. Kim left Sotheby's in 2000 to revive Design House Interiors and establish her current practice, Kim Coleman Interiors, LLC. Since returning to her practice, Kim has completed various residential and commercial projects in both New York and Palm Beach.

After attending Skidmore College, Kim moved to Long Island and graduated from the New College at Hofstra University. While there, she received a Helena Rubenstein fellowship in Museum Curation and Art History at the Whitney Museum in New York. Kim also obtained a certificate from the New York School of Interior Design and has served on several boards. including the architectural review board for the Village of Old Brookville. Kim Coleman Interiors currently maintains Offices in Glen Head, New York and Palm Beach, Florida.